MATTHEW 10:16
​I am sending you out like sheep among wolves. Therefore be as wise as snakes and as innocent as doves.

Behind the scenes of a film made amidst covid restrictions in NSW, Australia!

Our film, on Sept 26 2021 was a world premiere at FLOW - a film festival in Florida.  In September we were also listed on IMDB.

The art aspect of the film actually makes it possible to create artistic transitions and such. Once reaching the end, it also ought to make 100% sense as far as the plot is concerned.

FEBRUARY
​
Daniel's clever car crash sequence was added. Several more weeks in January were spent working on scene sound, scene by scene up to Act Three, sending over sound files to Gary who was there to help capture many of the scenes in production. He was trapped for a bit in the Northern Beaches with that last wave of covid... which created a small delay in setting some stuff up on my editing machine to assist in the process.
​
Meanwhile I'm keeping an eye on the distributor and agent... how effectively they handle the previous job vs. taking matters into my own hands. Setup fees either way are expensive with what the Australian government charges before you are even allowed to sell your own film, so I've been saving!

1-2 scenes left to complete. Most of film has been edited and is being polished. Special effects are still needed as part of that polish... I've also spent a lot of time working on transition images and establishing shots, using real images but in quite a few spots recreating them as art with acryllic style brush strokes or blenders. The same process has been used for the final paintings. It is slow but effective. The art with actors is features on the website as page headers!

I spent the winter school holidays editing. At the end of them, we shot scene 9, 22 and 24. On the Wednesday after, we recorded all the newsman narration for scenes 1 to 5, right before some restrictions came back into play. I suspected the screws would tighten again...

I am thinking of you as I read about the middle and upper classes leaving New York and L.A. Yes, Hollywood too as conditions grow worse... people defecating on lawns, needles from drug users as litter... Another youtube video by a Hollywood stuntman continues to show the very dark underbelly of those at the top of the Hollywood movie world system... and so... approach such a world very carefully... perhaps only with an eye for missions, as one might visit a prison!

Cannes film markets were online this year and looks like AFM... the American Film Market... will be too. While I originally found an agent to fly to these venues for me, my original coach with a background in film sales still feels a reputable agent can help better figure out tricky international waters.

There remain various scenes to film with minor characters and featured extras but that will wait 'til next holidays... for now the pay-the-bills job is consuming once more but I'm editing bits and pieces too.

​I've given Daniel many rough edits from Act 1 and half of Act 2 to look at now - with an eye to special effects.
​
JULY 4th

We started filming again at the start of June when actors playing key characters were available. One moved to Queensland mid June. Another was forced to move before completing their scene as a domino effect of covid19 - their landlord went bankrupt. Others looked to be busy the rest of the year. We've had 4-5 cancellations and rescheduled days caused by illness with nobody willing to risk causing others to get sick which is excellent.

Scene 62 took on a very different tone than I'd imagined... just looking at a single moment after filming today I realized it was unexpectedly sadder - instead of sinister - and I appreciate that surprise! I hope I can bring this out effectively in editing: we don't care as much if a villain perishes... but we do care if a nice guy is damned.

After tomorrow, the essential storyline character actors ought to be finished but there will still be several other scenes to do that add to exposition.

I've only just begun to edit... Here some images photographed on my computer screen to capture a little of what we have been accomplishing since the start, from the dreams to drama. 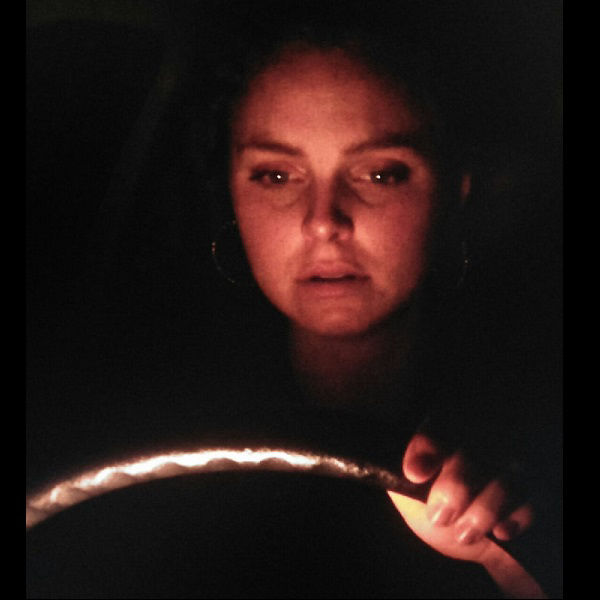 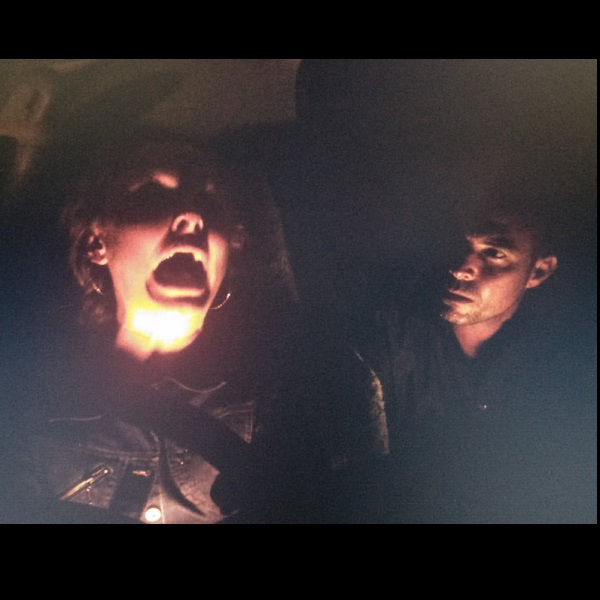 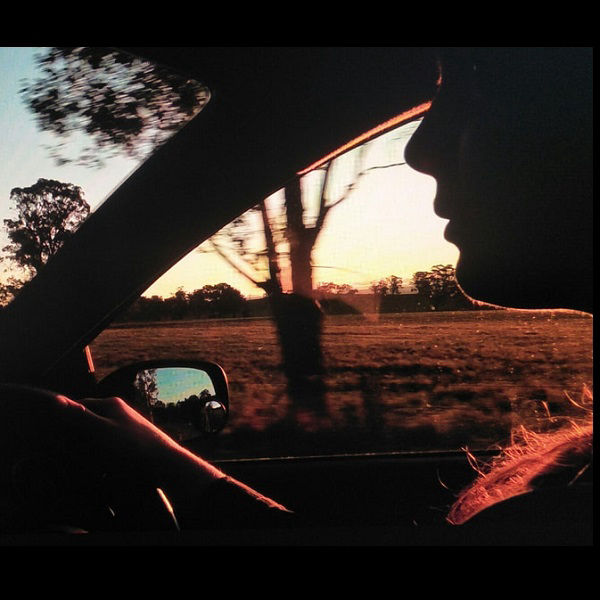 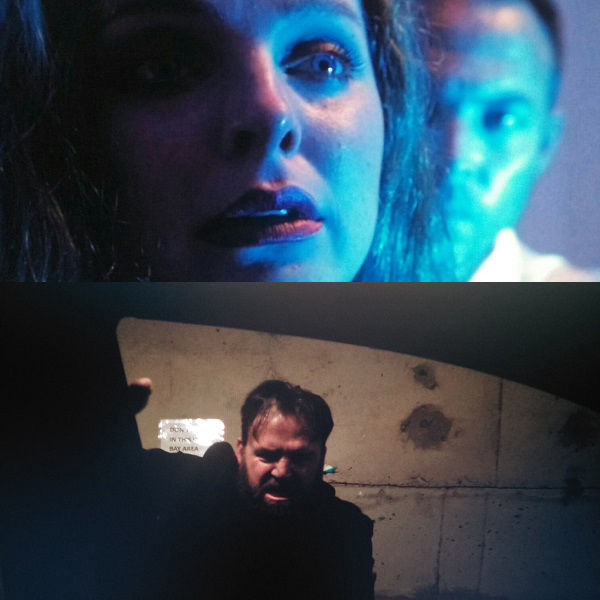 From end of March until April 17, everything has ceased but we are almost halfway through the production phase. An updated timetable has gone out only up to the end of April. Some scenes are waiting for rescheduling.

While government restrictions appear to aim for at least four weeks of minimal interactions which would take us to the end of April to stop or slow the corona virus, there's hope of a successful cure with trials in New York... nobody has died, and in many, symptoms are gone in 5-6 days.

I read that pharmaceutical companies in the USA allegedly can make 46 million doses by mid-April, but this virus hasn't even impacted 1 million globally. On the Australian government website, last days of March recorded showed massive drops in new infections, contrary to the predicted curve.

So I'm not ready to draw up another new time table just yet. I'm hoping all restrictions will be wiped by Easter. Even then, a couple scenes will still have to wait until after April to fit in. Meanwhile, Daniel has backed up a heap of footage on his drive too, to start playing with adding special effects in some of the scenes.

Meanwhile, here are a couple stills to show the red motel room and the black motel room sets with the lead actress, following the advice of a lady who typically does sets and costumes but who has been advising from a distance at this juncture.

The supporting actress got stuck in Queensland when the borders shut so we jumped ahead to complete 14 more solo scenes with the lead, based on a skeleton crew to keep numbers to a minimum. While the last weekend of March was rescheduled, there were further experiments underway for creating the restaurant and ballroom scenes. 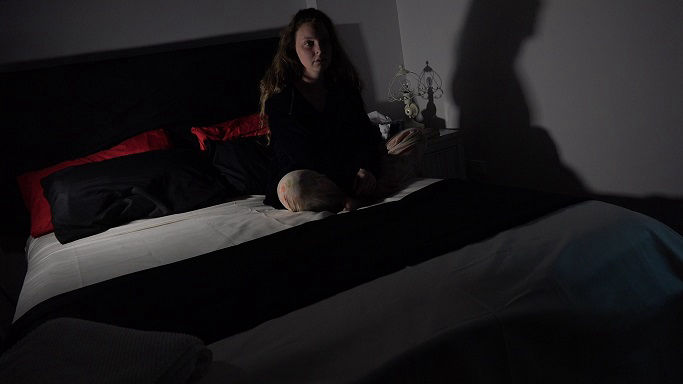 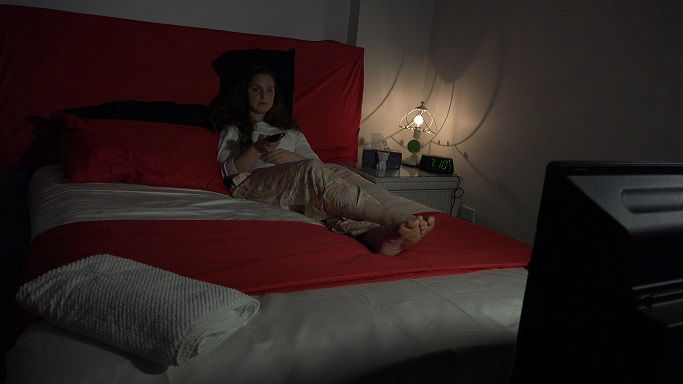 Scenes with minor characters, extras and non-speaking parts who do not impact the main characters and their essential story, are now cancelled or delayed until the covid19 madness is over. 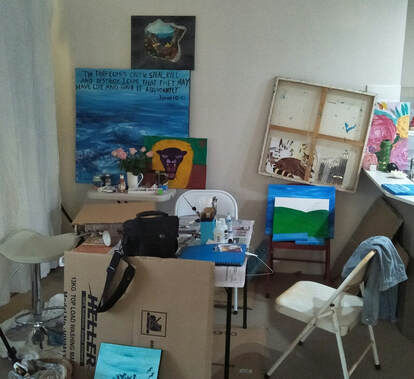 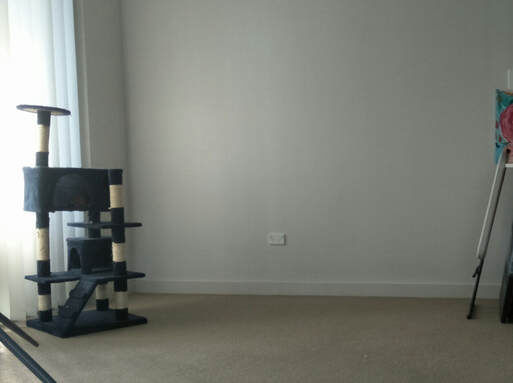 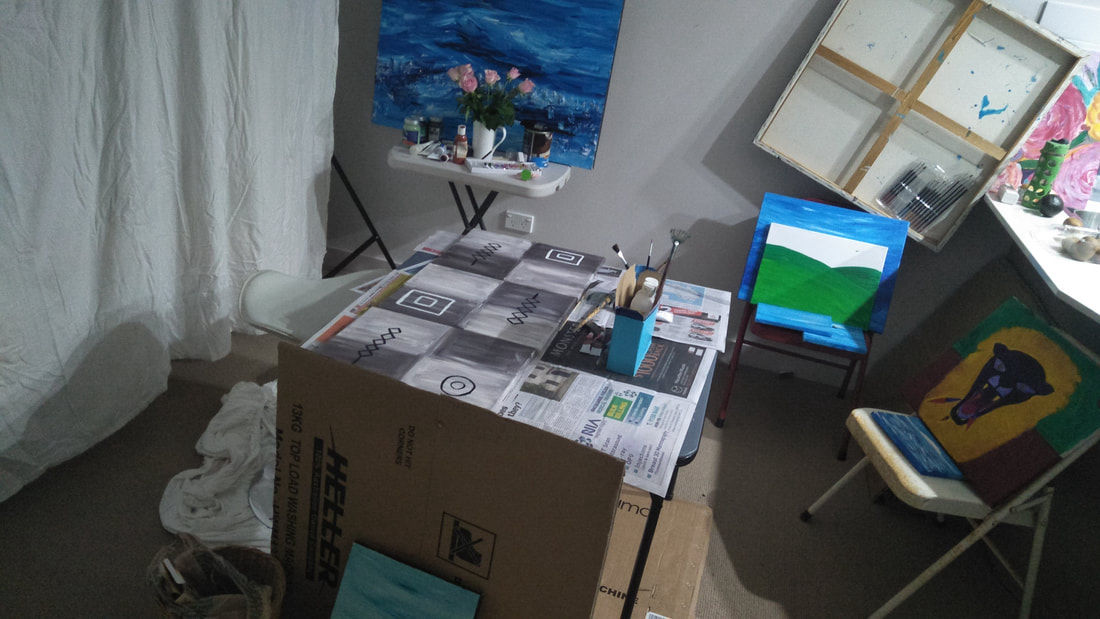 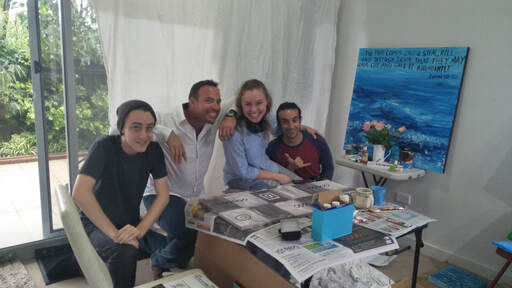 Filming began with an indoor artistic space due to bad weather outside... the show must go on! There was no easel because I don't use them... I don't want paint dripping to the floor... I personally prefer paintings to lay down on a flat surface! I'd been advised new filmmakers often fail to visually fill the space so I'm trying to be more mindful of the set - my latest learning curve! 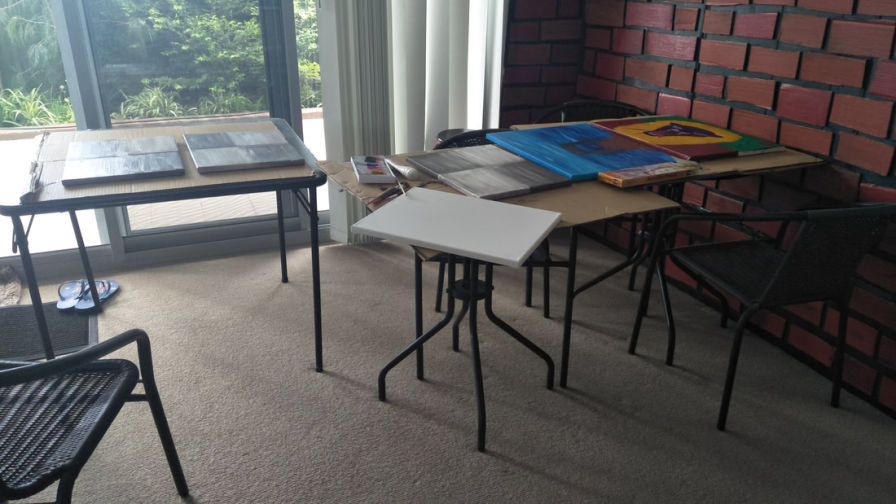 The brick wall is more full, I've begun creating artwork for the main character and more short experimental videos to clue me in to how to improve...

A second time table draft had gone out with estimated hours based on a one hour per page guideline. I need to find out from a special effects make-up artist if this is still fine but last film we still kept to the hour per page despite adding in a few simple weird make-up effects.

More chromakey experiments with set and props... though not as hypnotic as the table mats... More experiments to come to test out different looks in advance.

Lots of back and forth emails and texts right now to sort out the production timetable and starting in on details! Another meeting planned tomorrow with a local camera person.

Experiments with incorporating green screen effects to enhance the visual aspects. Since the film is about an artist, I tried out a number of different video patterns from online to look at colour.  ​(Experiments only HD format with an old Canon, not 4K)

While casting was not yet complete, a few actors offered suggestions to tweak some of the dialogue. Then behind-the-scenes folks met and discussed additional ways to prepare set and props to enhance the visuals.

After that meeting, a VR Game training scene was filmed with the character "Lucas" with the same limo and driver used several years ago in an episode of "Modern Family" when they came to Australia. 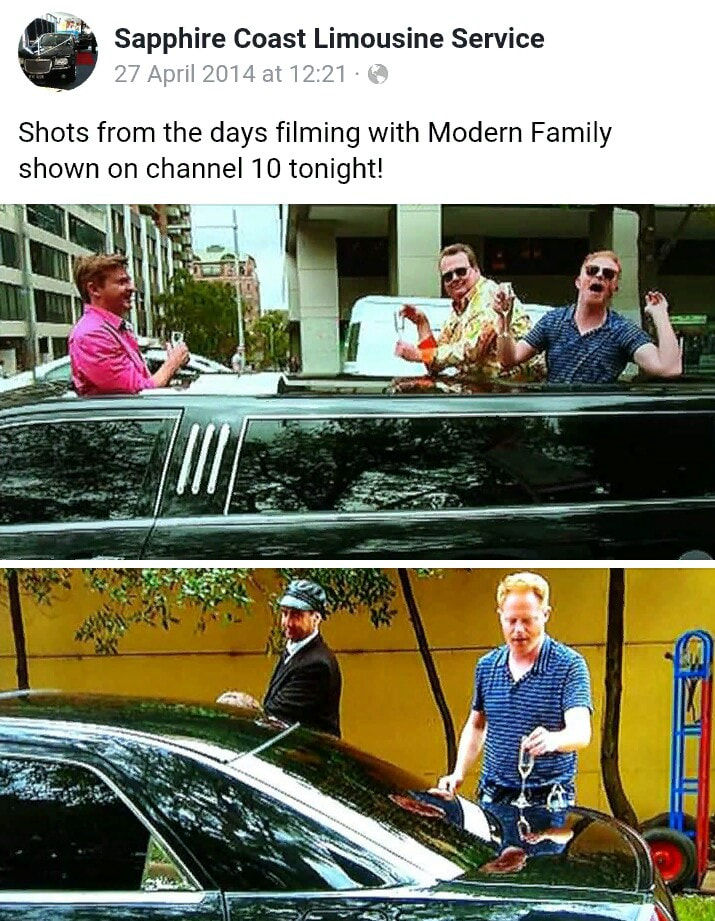 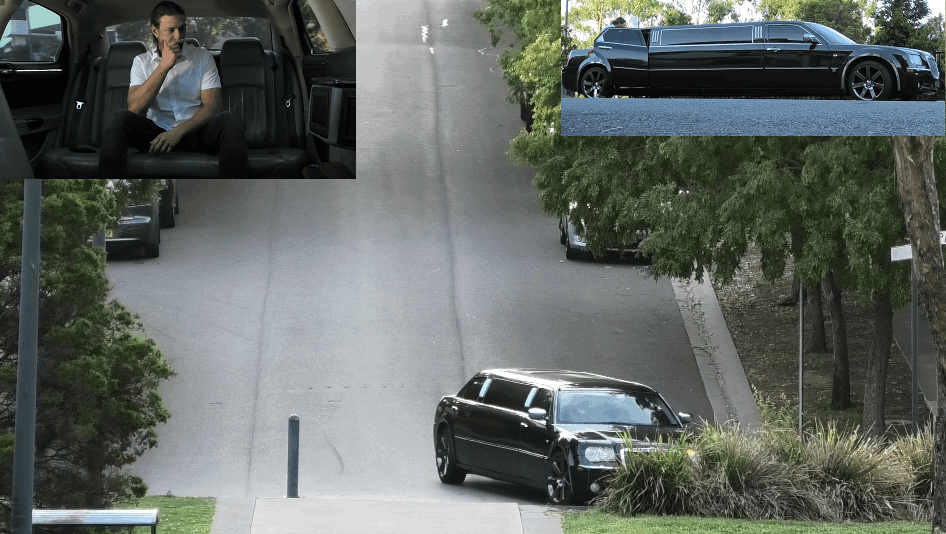 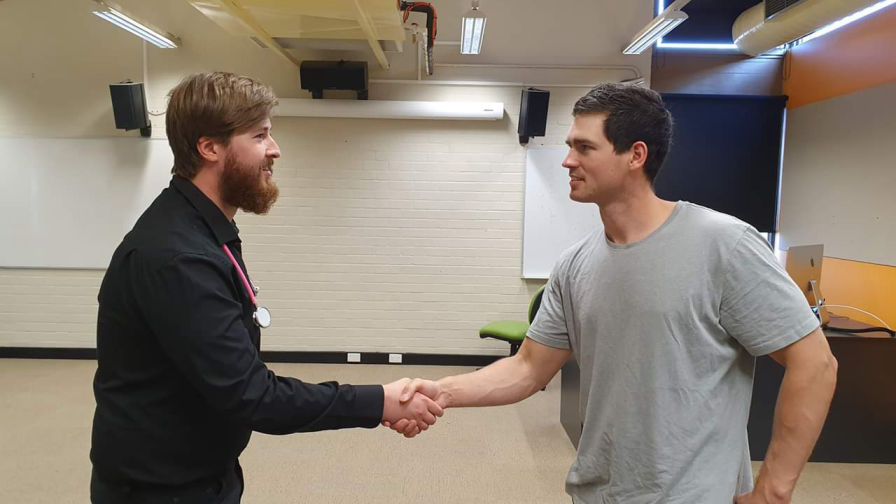 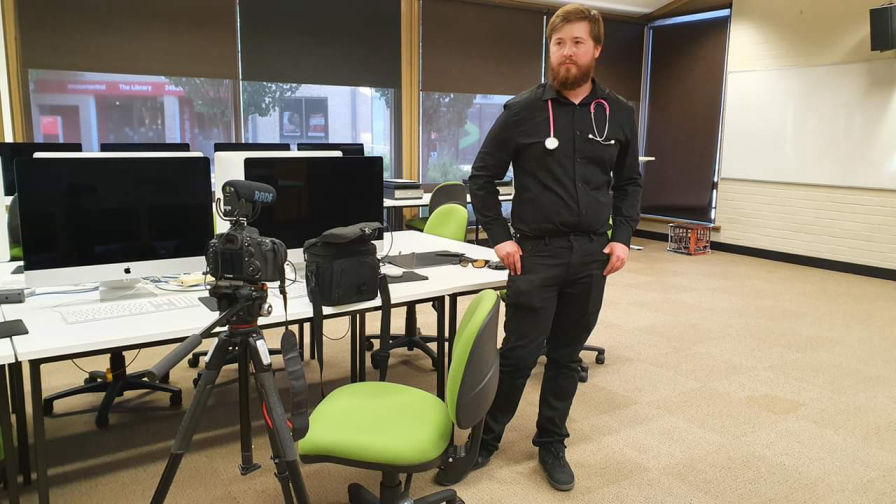 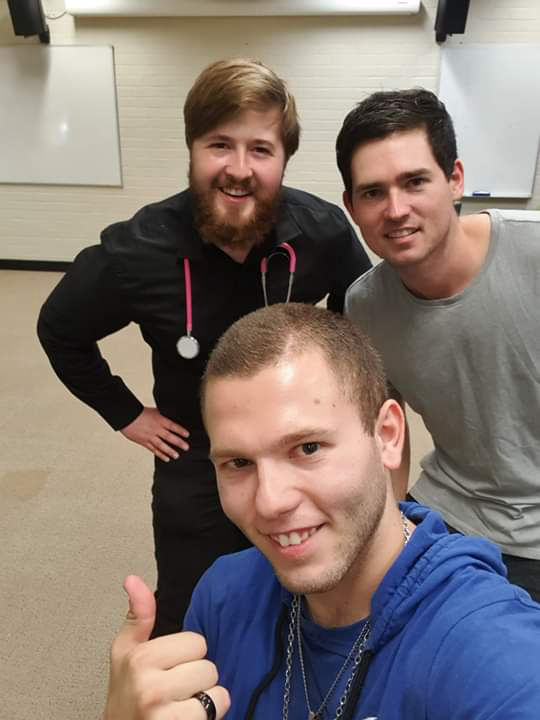 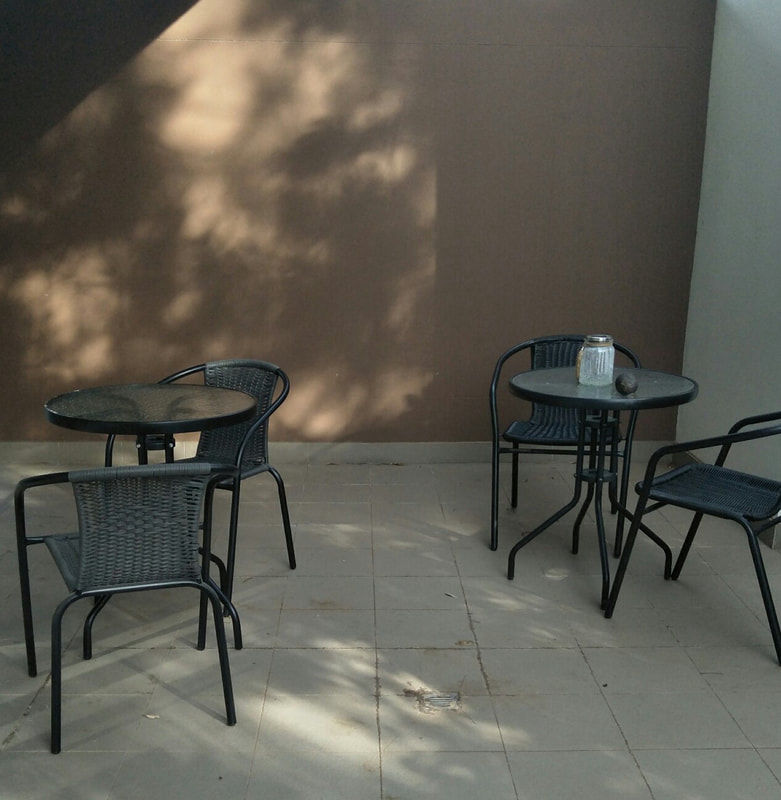 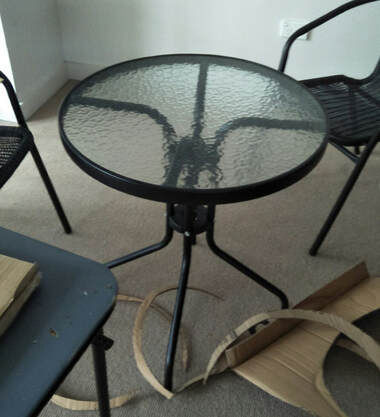 ​Goal: Create three different coffee shops by creating different looks. While public places are available, time-wise it gets tricky and is harder to control the environment. Some scenes require more time than is feasible in a public place. 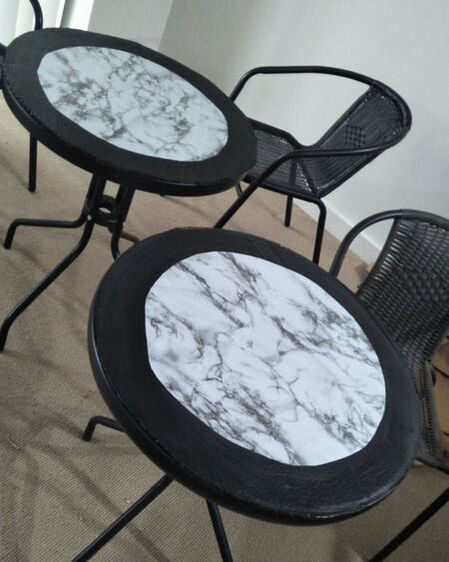 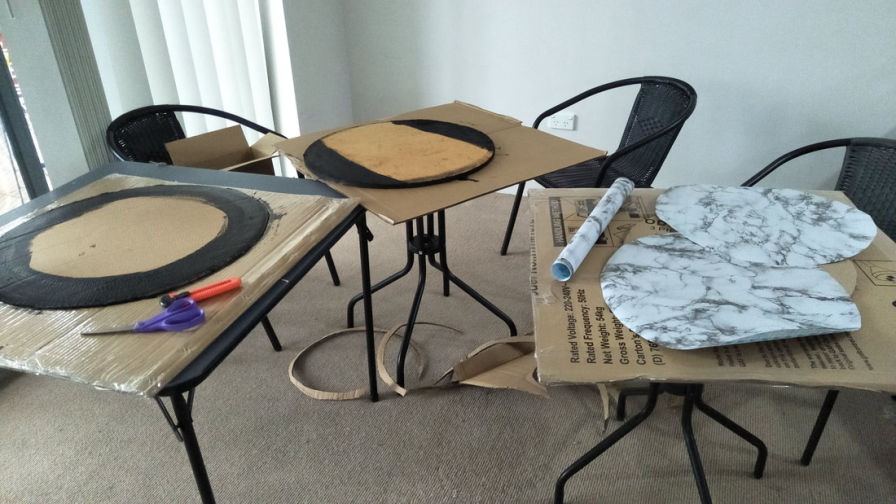 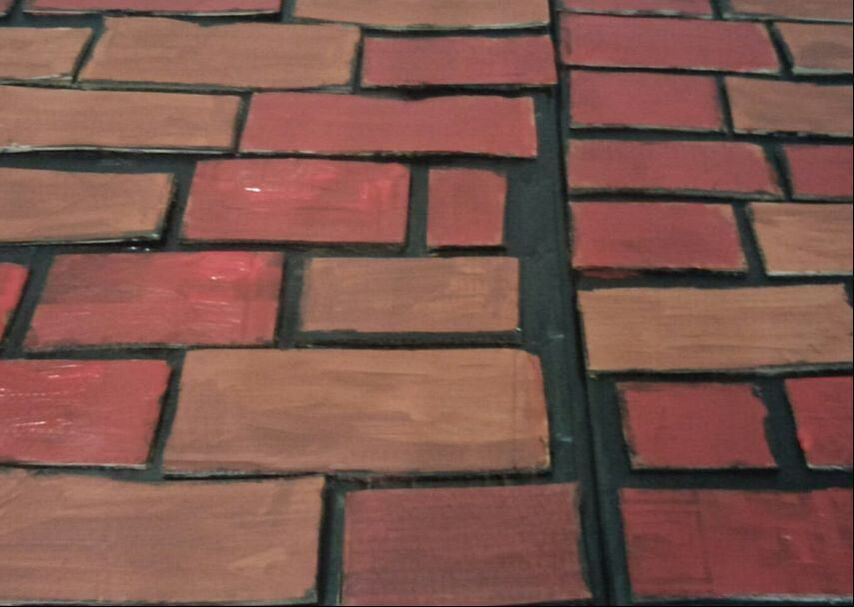 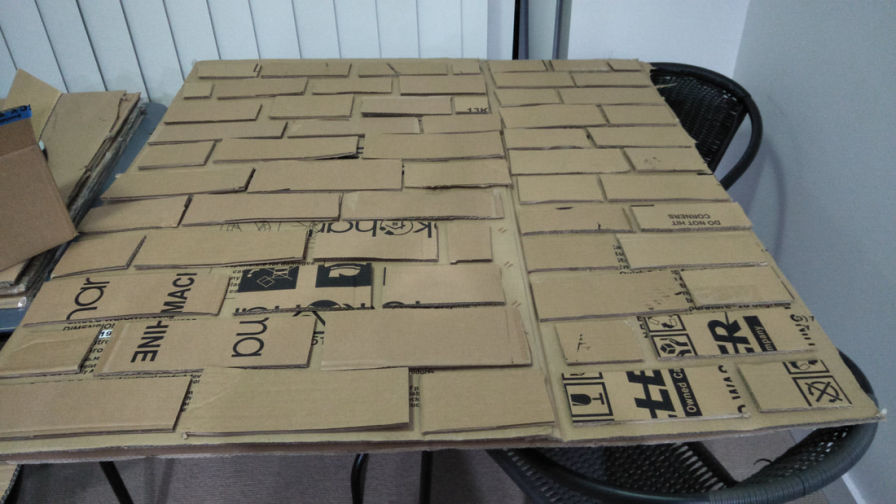